Details, shmetails. Nitpicking. Demanding. Overcritical. Hypercritical. Choose whatever word you want to describe it. Paying attention to even the smallest detail can result in huge rewards. You don’t do the details to showcase them in the end. The details, nitpicking and criticism early on in a process usually produce the final product that is worthy of the effort.

Where does the term nitpicking come from? Nitpicking is the process of removing the eggs of head lice (nits) from individual hairs. Years ago, the only options to remove lice were either to shave the hair totally off or to pick them off one by one, examining each individual hair. This is a painstaking, laborious process. But before modern chemicals were found to treat lice, most people only had these choices.

Out of this practice came the term nitpicking which has a negative connotation. The practice is described as meticulous, fastidious, and painstaking. Some people see it as a pastime that only looks for mistakes and inconsistencies. Well, DUH?!?! If we are not paying attention to the details in the work we do (i.e. nitpicking), we are putting out an inferior product or service. Unless you shop at a second-hand store or a scratch and dent outlet, don’t you expect a certain level of quality in the goods and services you receive? 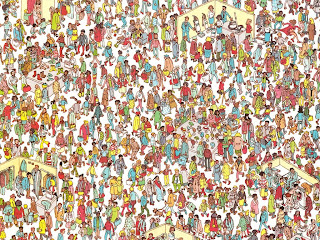 If you’ve never wondered “Where’s Waldo?” you can click on the picture above. A new window should appear so you can search the details of the picture to find Waldo. It’s a tedious process!

Walt Disney was the master in paying attention to the details. In the Magic Kingdom alone there are seven themed lands; Main Street, U.S.A., Adventureland, Frontierland, Liberty Square, Fantasyland, Mickey’s Toontown Fair and Tomorrowland. As you move from one land to another, everything transforms to fit the “land” around you. Music playing in the background, they type of pavement under your feet, the costumes of the cast members, the signage, the color of the lighting and the food that is offered are just a few areas where every detail has been addressed.