I hear a train a comin’ 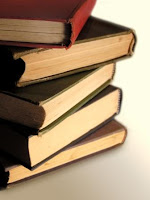 No, it’s not a freight train. I left off part of the word. It should read “I hear some training coming.”

Most business recognize the value of training when it comes to new employees. There is a formalized process introducing them to the company, the industry or the culture of the business. Rarely does anyone start a new job and is on the front lines as soon as the ink is dry on the application. It may seem that way because the level of service you receive stinks. Poor service can be attributed to the person having a bad day. But, more likely than not, it’s due to a lack of training. And ongoing training at that.

How often do you attend training? Think about your current job. When was the last time you participated in formalized training?

The brownie point/gold star answer should be #4, last time you worked.

How about another definition of training? This goes to show you just how powerful training can be. This training cost an estimated $500 million dollars. Officially, it only lasted for 9 days. But the effects are still being felt today. 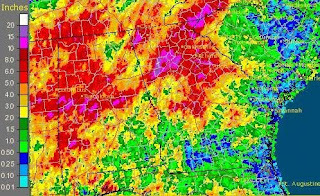 In meteorological terms, training refers to repeated areas of rain that move over the same region in a relatively short period of time. From September 15-23, 2009, some parts of metro Atlanta received over 21 inches of rain which resulted in some of the worst flooding in over 500 years. The above map shows you just how much rain fell during this time. If you look closely, there is an area of white that is on the west suburbs of Atlanta, just a few short miles from where we live. While our house and our possessions were not damaged, many were not so fortunate. Parts of our old neighborhood were completely submerged, houses included. 4 of the 5 ways I could use to get home were totally blocked. Roads were under 10 feet of water in some places. One school had water almost to the top of the roof.

You might think you have no responsibility when it comes to training. But it’s not just a one-time thing. If you want to grow personally or you want your business to grow, you can’t afford to ignore training as an important  part of your business plan.

While there are thousands of books, programs, articles and web sites to help you with training, some of the best training on the planet can be found at the Disney Institute. Your training doesn’t have to be this formal. Just understand how impactful it can be.

4 Responses to I hear a train a comin’