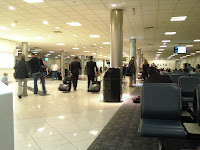 And he keeps smiling at everyone who passes by. He seems to be talking more to airport employees rather than passengers. But he’s not wearing a badge. It doesn’t appear that he works here.

He keeps asking people if they are having to work during the holiday. All of the conversations end the same. “Well, have a great Thanksgiving.”

Why is he doing this? What is motivating him to be this friendly ambassador? I wonder who he works for?

Wait a minute. There’s something on his shirt. It’s a logo or design on his pocket. Maybe I can get a picture if I get close enough.

Now I get it! I recognize that logo. I wonder if he works for them? Here he comes. I’ll ask him.

It all makes sense now. It’s something he believes in. He’s actually a retail manager. But he believes that no matter where he is, it’s his job to help spread a little magic to those he meets. He also believes that everyone he comes in contact with is a potential customer.

What if we all had the same attitude? Instead of talking about this guy at the airport, we could be talking about him at the restaurant, or bookstore, or sporting event, or grocery store, or . . . anywhere.