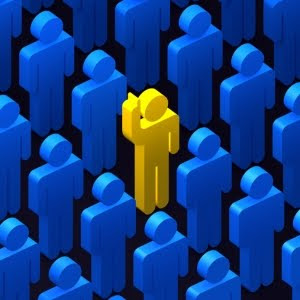 Tonight we had a kickoff dinner and meeting for 2010. Everyone was there and I think we all enjoyed the time together. Food was good too. Yes, it was late on a Sunday night. There probably wasn’t a better time where we could get everyone on the same page at the same time so that the same message was communicated properly. So thanks for sacrificing your night to be there.

Instead, we want to be the yellow. It’s easy to count the yellows in the picture above. Being just another blue is being just like everybody else. There are plenty of blues out there. Everywhere you go you run into blues.

What are you going to do to be a yellow? Do you need help getting to yellow? Maybe you think you can only make it to green . . . (yellow + blue = green). Is there another member of your team that is already a yellow? What can you learn from them so that everyone on your team is now a yellow? Is someone holding you back from being a yellow?

I’m gonna be a yellow.